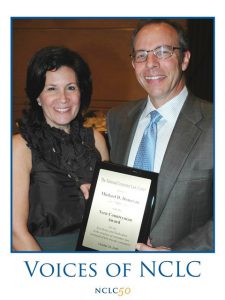 “Here’s a lesson I’ve learned in my career: a company with a computer program can steal more money than 100 folks with guns.

In my practice, and before that when I worked at the Securities and Exchange Commission, I’ve seen countless people abused by corporate wrongdoing – consumers being made victims through trickery, deceit and outright lies – facilitated by big money, special interest groups, and powerful law firms. That’s what I fight against as a consumer lawyer.

One example: in the early 1990s, credit card companies including MBNA, Chase, Greenwood Trust/Discover, Citi, and others were charging $35 late fees on balances of $50 or less. These were egregious and excessive fees which violated various state laws that capped these penalties, and really hurt the people who could least afford to take a hit.

We decided to file a number of late fee cases to stop this abuse, including several which made it up to state Supreme Courts, and one — Smiley v. Citibank — which went all the way to the Supreme Court of the United States, where we lost in a decision written by Justice Scalia. Just before that oral argument, I realized how much we were up against when I received a call from a lawyer who was meeting with the Office of the Comptroller of the Currency (OCC) to change the definition of late fees so the banks could continue abusing people. Somehow they mistakenly thought I was on the defense team, and called me offering to “help out” writing the new proposed rule. When I explained that I represented the credit card consumers, the line went “click” as he hung up on me. That new rule, written well after we had filed the cases and finalized just weeks before the Supreme Court oral argument, became the basis for Justice Scalia’s decision.

I’ve learned that the deck is stacked against us, so the only way to be successful in this fight is to prepare, prepare and prepare some more. If you do it right, you can win. And when we do, I feel exactly like Winthorpe and Valentine at the end of the movie Trading Places, when they exchange that dollar bill. In fact, I have a picture of it taped to my mediation book.

Ultimately, I do what I do because the people who can least afford legal representation are the ones who need a lawyer the most. I do it because this is how I can have the biggest impact on the greatest number of people, as much as any lawyer can have.”- Mike Donovan, founding member of Donovan Litigation Group, LLC

Has the Debt Collection Industry Captured the CFPB?

Non-Pennsylvanians Can Sue PA. Businesses for Out-of-State Transactions Under UTPCPL

The Low Spark of Motions to Strike Class Allegations