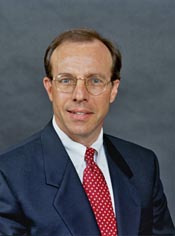 He is a graduate of Vermont Law School (J.D. cum laude 1984) and Syracuse University (A.B. 1981). He was the Head Notes Editor and a staff member of the Vermont Law Review from 1982 through 1984. While on the Law Review, he authored Note, Zoning Variance Administration in Vermont, 8 Vermont L. Rev. 370 (1984). Following graduation from law school, Mr. Donovan was a trial attorney with the Securities and Exchange Commission in Washington, D.C. where he prosecuted numerous securities cases and enforcement matters, including injunctive and disciplinary actions against public companies, broker/dealers and accounting firms. Mr. Donovan has co-authored “Preserving Judicial Recourse for Consumers: How to Combat Overreaching Arbitration Clauses,” 10 Loyola Consumer L. Rev. 269 (1998); “The Overlooked Victims of the Thrift Crisis,” Miami Review, Feb. 13, 1990 and “Conspiracy of Silence: Why S&L Regulators Can’t Always be Trusted,” Legal Times, Feb. 5, 1990.

Mr. Donovan has served as co-lead counsel in the following securities class actions:

In addition, Mr. Donovan had had a substantial role in the prosecution of the following cases, among others:

In the area of consumer justice, Mr. Donovan has argued the following cases, among others:

Has the Debt Collection Industry Captured the CFPB?

Non-Pennsylvanians Can Sue PA. Businesses for Out-of-State Transactions Under UTPCPL

The Low Spark of Motions to Strike Class Allegations